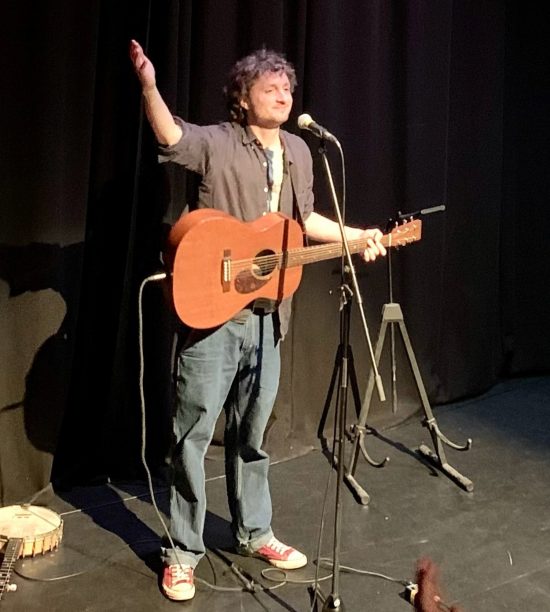 Causeway Coast & Glens Council had the foresight to offer free tickets for this gig to mark the resumption of live events in their flagship Flowerfield Arts Centre. And so it was that, on a rare crisp sunny Sunday in winter, on the beautiful North Antrim Coast, a privileged bunch of us forsake the lure of the beaches to enjoy an afternoon with Vermont native, Sam Amidon. Steeped in music from childhood, Amidon started his performing career as a teen playing Irish fiddle music, but today he entertained us with acoustic guitar and open-backed 5 string banjo. He has spent most of his music career so far breathing new life into the ‘music of the people’, folk songs that are sometimes centuries old. He does write original songs, but his set today concentrated on his unique interpretations of both American and English folk and Old Time standards, which were warmly received by the listening audience in the intimate auditorium.

Kicking off with his unusual version of the well known Appalachian song Little Maggie, we were introduced to his dynamic, almost plucking, style of playing on his frailing banjo, held high on his chest. Then it was on to his mahogany top acoustic Martin guitar for No Sir, an English folk song that also made its way to the US. Between songs, Amidon set the audience at ease with his anecdotes and interesting facts about the tunes and his life on the road. Other highlights were the high tempo As I Roved Out, where he talks to his banjo between the lines of the song, and Dry Bones in the Valley, one of the less well known songs from the Harry Smith Anthology. There was even a cover version of a Tim McGraw song, My Old Friend, and an amusing road story to explain how that came about. Time Has Made a Change In Me, a song that his parents sang to him in childhood, became a singalong in that perennial tradition of folk concerts, and the nostalgia wasn’t lost on the raptured audience.

A most fitting start to the resumption of live music and arts events - long may it continue.