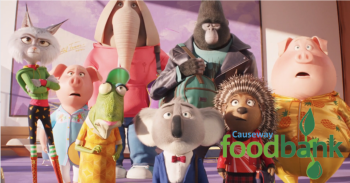 Over 1.5 tonnes in food donations have been distributed across Northern Ireland since February 2022 as part of the Cinemagic Young Audiences Supporting Foodbanks Initiative. Rather than paying for ticket to gain entry to see new family movies, those attending Cinemagic foodbank film screenings were asked to donate essential food items to support local community foodbanks.

In partnership with The Trussell Trust, Cinemagic delivered 21 foodbank film screenings across Northern Ireland in towns including Armagh, Ballymena, Belfast, Bellaghy, Lisburn and Portstewart. The initiative engaged with 2,600 young cinemagoers and the donations have equated to over 3,500 meals for local communities in Northern Ireland. The regional events were supported by the BFI FAN Film Exhibition Fund, awarding funds from National Lottery.

This Sunday 27th November marks the culmination of the year’s efforts with over 450 young people and families attending the Cinemagic Northern Ireland Premiere of the 2022 CBeebies Pantomime ‘Dick Whittington and his Cat’ in Odeon Cinemas, Belfast.

Ahead of attending the Cinemagic Northern Ireland Premiere this weekend, Belfast Lord Mayor, Christina Black said “I’d like to thank Cinemagic for the wonderful work that they’re doing, not only to give much needed support to local communities through foodbanks during these really challenging times, but also to raise children and young people’s awareness of the need to support each other in our communities, and to do all that we can to help tackle poverty and inequality. My thanks also to all of the young Cinemagic audiences who gave so generously and made a real difference. Belfast has proven once again that it’s a kind, welcoming and caring city – and one that does its very best to help those in need.”

Chris Shaw, Cinemagic Festival Programmer said “As part of our new social responsibility initiatives for 2022, Cinemagic embarked on the Young Audiences Supporting Foodbanks Initiative working with South Belfast Foodbank in the first instance. The initiative received an overwhelmingly positive response and it worked to motivate young audiences to play a part in tackling poverty. With support from the BFI FAN Film Exhibition Fund, awarding funds from National Lottery, Cinemagic was able to expand the initiative to help foodbanks across Northern Ireland and offer events as part of the Cinemagic Festival Programme in October.

We would like to thank all of the venues and audiences who got on board with us and who have helped us reach over 1.5 tonnes in donations and 3500 meals for those in need which is incredible. To mark the achievement, we are thrilled to present the Northern Ireland Premiere of the 2022 CBeebies Pantomime and the donations from over 450 people attending will go directly to local communities in South Belfast.”

Bruce Gardiner-Crehan, Manager for South Belfast Foodbank said “This innovative idea, to bring the thrill and magic of cinema and tie it closely to the local community that seeks to make a positive difference in the lives of those affected by poverty is an absolutely unique idea. It helps young people and children to understand that some people struggle to make ends meet and that it’s up to all of us to play a small part. Empowering and creating a new generation of justice seekers that care for people is a wonderful thing that we wholeheartedly support. Thank you so much for helping people most in need.”

Jonny Currie, Northern Ireland Network Lead, The Trussell Trust said “As we head into a very challenging winter period for our food banks, the partnership with Cinemagic is so important to help make sure our network has enough supplies of emergency food to support people in crisis. No one should have to rely on emergency food, and we are delighted that this partnership enables us to raise awareness of poverty among younger audiences.”